Recently our hospital has seen a rise in canine heartworm disease. Personally, I have treated several dogs this past year, so I thought it would be appropriate to explain what heartworm disease is, how to treat it, and most importantly, how to prevent it.

All dogs are susceptible to heartworm disease. It has been reported in dogs in all 50 states in the United States.  Experimentally, when dogs are exposed to mosquitoes carrying heartworm disease, virtually 100% of them will develop heartworm disease.  So the transmission is almost guaranteed. Dogs will typically have high worm burdens and these worms can live for 5-7 years. Microfilariae can live for years after the death of the adult worms. Since mosquitoes can come into the house, ALL dogs and cats (whether they are indoor or outdoor) should be protected.

How will you know if your dog (or cat) has heartworm disease?  Unfortunately, there are often no clinical signs or symptoms; especially in the acute stage of the disease. In fact, most of the dogs that we have diagnosed at our hospital are completely asymptomatic. Clinical signs that can be observed during higher stages of heartworm disease may include coughing, exercise intolerance, syncope (fainting), distended abdomen, respiratory distress and even sudden death. Since many patients are low stage (stage one) and asymptomatic, we really rely on our screening heartworm test to diagnose heartworm disease early. 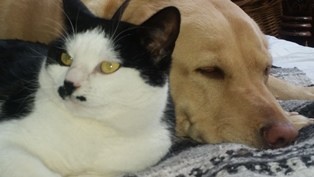 Heartworm disease can have many deleterious effects on the body.  Most often it affects the heart and lungs.  In dogs, the heart is the organ primarily affected. And if left untreated, collapse and heart failure can develop. In cats, the disease has a different presentation.  Cats often mount a severe inflammatory response in their lungs.  This is often referred to as “HARD” (Heartworm-Associated Respiratory Disease). This can happen even with a very low worm burden. Acute or sudden death may happen and is usually because of worm death or pulmonary failure or a pulmonary embolism.

Heartworm disease is fairly easily diagnosed in the dog.  It is the standard of care that screening for heartworm disease is performed every year in the dog. The earlier heartworm disease is diagnosed and treated, the better the patient’s chance of success after treatment.  The test is a small blood sample. Antigen tests detect the presence of an adult female heartworm. This is the test that is routinely performed at veterinary hospitals. However, there is also an antibody test which detects whether or not a pet has been exposed to heartworm.  If a pet turns up positive for heartworm disease, your veterinarian will likely recommend further tests in order to properly “stage” your dog.  We also STRONGLY recommend testing any dog that has been rescued from the south, at the time they are adopted and then again in 6 months. Unfortunately, testing in cats proves to be quite challenging.  Because of their low worm burden, they often show up falsely negative with antigen testing.

The standard treatment of dogs involves administering “adulticide” injections. When and how many adulticide injections are given is usually dependent on the stage of heartworm disease or the clinician preference. The recommended adulticide is called Melarsomine dihydrochloride (Immiticide) which is given as a very deep muscle injection. In addition to repeated doses of Immiticide, dogs are often give anti-inflammatory drugs (non-steroidal anti-inflammatories or steroids) as well as an antibiotic called Doxycycline. This antibiotic decreases circulating “wolbachia.”  Heartworms have a symbiotic relationship with this rickettsial parasite and need wolbachia to thrive. Dogs can sometimes develop a local inflammatory reaction at the injection site (this is the most common complication of treatment).  Less commonly, dogs can develop pulmonary thromboembolisms as the adult worms are killed. Therefore, the most cumbersome aspect of treatment is STRICT CAGE REST for months after diagnosis.  This is to prevent fatal pulmonary thromboembolism. 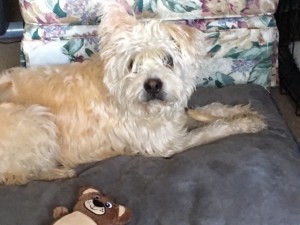 During the same month, I examined another rescue dog named “Ollie,” a 1 1/2 year old male Australian Cattle mix who also tested positive.  In November 2015 I examined “Lady” a 2 year old female spayed German Shepherd.  She was also a rescue dog from Georgia.  She also initially tested negative for heartworm disease prior to adoption, however when we retested her at Belle Mead Animal Hospital, less than a year later, she was heartworm positive.

Lady and Ollie were asymptomatic. Their owners were actually surprised that they tested positive. Chance had an occasional cough when initially adopted. Further testing was performed to properly stage them. Because Chance was a slightly higher grade of heartworm disease, he went through more testing than Lady and Ollie.  And his immiticide was administered a little bit later. 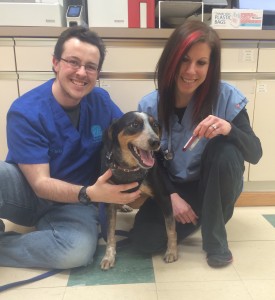 Getting a blood sample from Ollie 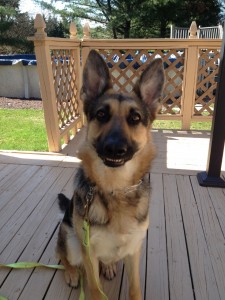 They were all started on an antibiotic and anti-inflammatory. Heartworm preventative was also instituted. Subsequently, all three dogs were admitted to the hospital for an immiticide injection and then came back a month later for two more immiticide treatments. After STRICT rest for months, all three dogs did well after heartworm treatment and are still doing well! Ollie has been retested and is currently heartworm negative. Lady and Chance will be due for their heartworm tests soon. 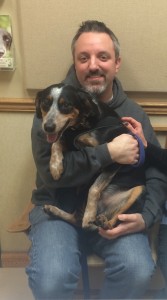 Ollie and his Owner after treatment

It is extremely important to remember that heartworm treatment for cats is extremely risky. Although adulticides have been used in the past to attempt to treat cats, a significant  percentage of them develop pulmonary thromboembolisms and this is typically fatal.  Therefore, we are unable to definitively treat cats.  We merely treat their  symptoms which amounts to treatments for decreasing inflammation in the lungs.  Dogs with heartworm disease usually do respond to treatment, however prevention of the disease is much more safe and economical.  Furthermore, in the patients that I have treated, owners have described how inconvenient and difficult it was to keep their pet confined and exercise restricted for an extended period of time. 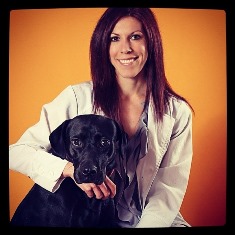