Physical rehabilitation is the practice of restoring normal function to the body through a variety of modalities while managing any pain and discomfort.

Depending on the pet’s diagnosis, the modalities offered may include physical manipulation and massage, therapeutic exercises and ultrasound, electric stimulation, stem cell therapy, platelet rich plasma, cryotherapy and thermotherapy. Not all modalities may right for every pet. 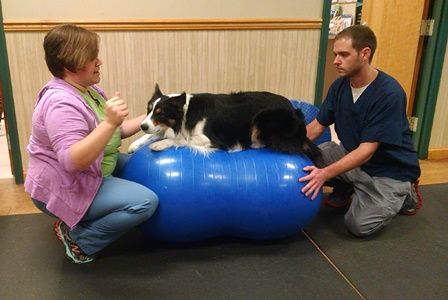 Normal body function is different for every animal. Therefore, a consultation is set up initially with Dr. Kim Somjen, DVM, and the client to discuss the pet’s condition. Based on the client consultation, further steps are taken to find out exactly what is causing the pet’s pain or physical disability. This will require a physical examination of the pet and tests that may include an MRI and full body X-ray. Based on the findings, a diagnosis can be made and a correct treatment plan can be formulated.

Raven is a 10 year old boxer and is one of our first patients in the program at Belle Mead Animal Hospital. Years ago, Raven tore both cruciate ligaments individually. These ligaments are what stabilize the dog’s knee, the same as in humans. Raven had surgery to repair one knee, then the other. Unfortunately, he developed an infection in the plate from the first operation, and he had a third surgery to pull that plate. 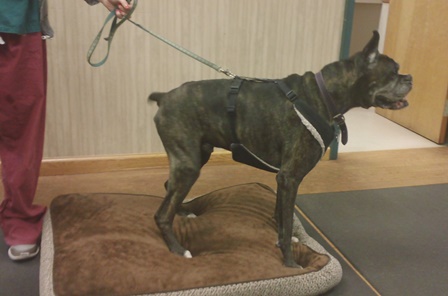 In the beginning of the program, we noticed Raven had problems with bending his knees. Arthritis had set in, and he did not have good range of motion. He could not sit down normally at that point. We worked with him to increase his range of motion, and today he can again bend his knees to sit.

However, more recently we noticed he was walking in an odd manner and was stumbling a bit when he turned. We ordered an MRI and further testing, concerned he had developed a tumor that was affecting his movement.

It’s always necessary to learn exactly what is causing a behavior or symptom before starting treatment. For instance, if tests indicated Raven had a herniated disc in his neck, certain exercises would hurt rather than help him. If we discovered a cancerous tumor, we would not use laser therapy.

What we found was that Raven has a condition called canine degenerative myelopathy. This is an incurable, progressive disease of the spinal cord where the nerve fibers in his spine are starting to lose their protective coating. This results in a loss of communication between nerves in the lower body of the animal and the brain.

Progressive weakness and lack of coordination of the rear limbs are often the first signs seen in affected dogs, with progression over time to complete paralysis.

Raven’s case indeed began in his back end. He actually doesn’t know where his back end is. We cannot stop the disease but we can treat it. Raven is on a program including supplements, some experimental protocols, acupuncture, and therapeutic exercises. He spends two days a week working with us at the hospital. During those days he gets treated with heat, massages, manipulation for better range of motion, and a few therapeutic exercises. His parent works with him at home as well.

Raven is never going to get up and walk normally at this point. But we have already succeeded with increasing the range of motion in his knees, and he is now able to bend his knees to sit again. 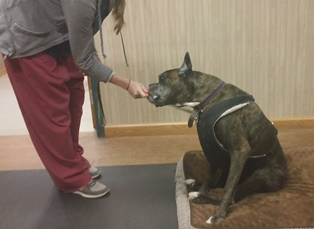 Our current priority is to help Raven maintain as much muscle as possible. We want to keep him walking on his own. The longer we can keep him walking, the better off he is. Therefore, we teach him exercises that challenge him so he understands where his legs are and how he is going to place them.

We do a few different things with Raven. Sit-stands build a lot of muscle. Because Raven loves his dog beds, we accommodate him with a bed. He is eager to do his exercises on his dog bed, and he responds well with food rewards.

Raven does not know where his feet are going all the time. For instance, most dogs can walk backwards – they might go into an area and can back out of it easily. However, Raven has a very hard time backing up. The hardest exercise we do with him is encouraging him to back up. He simply cannot lift his feet up and walk backwards.

We reward the tiniest little behavior that Raven can perform because it is so hard for him. We practice a backing up exercise until he takes 20 baby steps. If he has a straight line where he is not allowed to turn, he does a lot better. The owner found that out in the aisle of the RV!

Another behavior we do with him is turning in tight circles which makes him use his back legs and cross them over. This practice helps him figure out how to cross over and stabilize himself. Raven is most unstable with going side to side. We practice these exercises on both left and right.

The average dog in Raven’s condition ends up paralyzed after about 6 months without physical rehabilitation. Raven has been in our program for 8 months now and is doing extremely well. 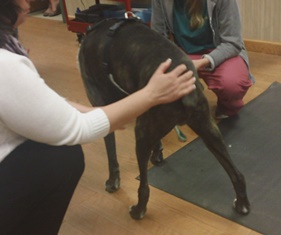 Right now Raven does not know he can’t do certain things. He simply enjoys the exercises and doesn’t want to leave the hospital once he gets here. At some point, Raven may be a candidate for a cart. For now, Raven is still walking by himself, and he’s a super happy dog!

Physical Rehabilitation with Dr. Kim Somjen, DVM
How to prevent and treat musculoskeletal disease in your pet
The benefits of Class IV Laser Therapy for your pet 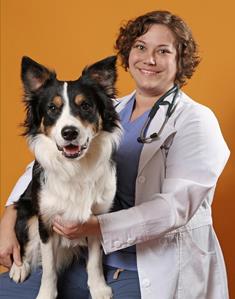