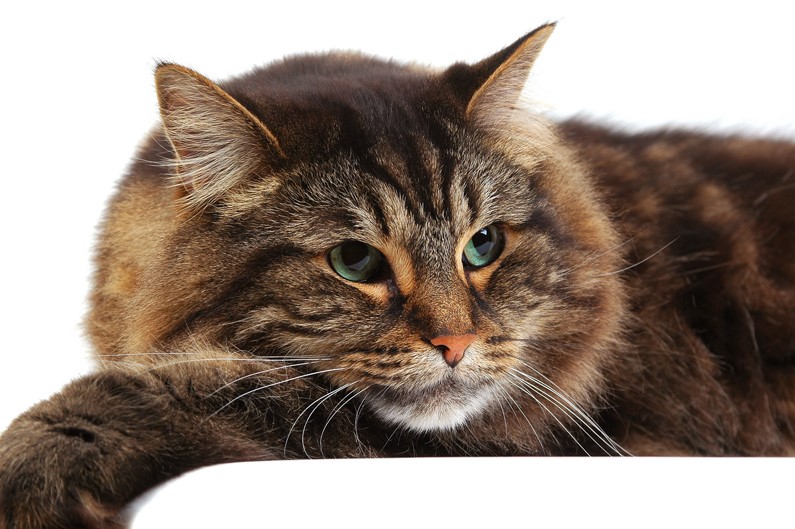 If your older cat is eating well but still losing weight, has an unkempt haircoat, and seems restless or even hyperactive, there’s a good chance that he or she may have a disease of the thyroid gland known as hyperthyroidism.

The most common hormonal disorder in middle-aged to senior cats, hyperthyroidism occurs in males and females alike, has a median age of onset of 13 years of age, and is so wide­spread that routine screening for the disorder is usually part of most veterinarians’ twice-a-year senior care wellness exams. The incidence of hyperthyroidism is increasing, perhaps due in part to heightened awareness and screening as well as the fact that cats are now living longer than ever before. Fortunately, several effective treatments are available and with early diag­nosis, treatment is usually successful.

In the vast majority of cases, hyperthyroidism is caused by benign nodules called adenomas that form on one or both lobes of the thyroid gland, causing the gland to produce excessive amounts of thyroid hormones. These hormones regulate metabolism, including the rate at which your cat’s body burns calories, and ultimately affect every system in the body. Your veterinarian may be able to feel the enlarged lobes, located in the front of the neck on either side of the windpipe, and will confirm the diagnosis with a lab test to check thyroid hormone levels in the blood.

The most common sign of hyperthyroidism in cats is weight loss despite increasing food consumption, followed by a decline in grooming

with excessive shedding and matting, increased thirst and urination, and sporadic vomiting and diarrhea. Your veterinarian may also detect a rapid heartbeat, which can be an early sign of dilated cardiomyopathy, a serious consequence of untreated hyperthyroidism in which the muscle wall of the cat’s heart becomes thickened, even­tually leading to heart failure and death. Other cardiac signs and symptoms can include heart murmur, high blood pressure, weakness, and panting or labored breathing.
Many of these symptoms could indicate other diseases, and will not all be present in each and every cat with hyperthyroidism, but because the disease is so common and can be treated, every middle-aged or older cat that has any of these symptoms should be tested for hyperthyroidism.

Once a diagnosis of hyperthyroidism has been confirmed, your veterinarian will discuss the fol­lowing treatment options with you:

Each has its advantages and disadvantages, and the choice of therapy may depend on your cat’s overall health, the severity of symptoms and extent of disease, availability (of radioactive iodine), and the expense involved with each option.

Early detection increases the chances of treatment success in most feline diseases, including hyperthyroidism. As your cat enters the senior years, visiting your veterinarian twice a year for senior care wellness exams becomes more important than ever!